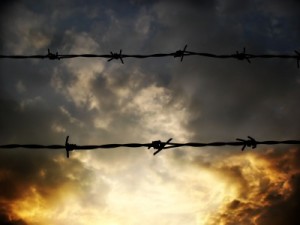 This post is very different for me and very hard for me to write because, #1, it’s terribly sad and #2, I’m FURIOUS over it. You can either read it here or watch the video or I’ll explain it in a nutshell.

This woman’s fiance was killed leaving her with a small son and another on the way.  She met up with Lee Thomas Langworthy and the two of them set up house.  She wanted a father for her boys.  One night while she was making supper, her youngest son was in her bed taking a nap and Lee went in to get him but he wasn’t breathing.  He was taken to the hospital and though there was slight bruising on his neck, it was pronounced after the autopsy that it was SIDS he died from.

A few weeks later she had put her other son to bed and got up the next morning and went to work without first checking on her sleeping baby.  She called home later in the morning and Lee told her that her son was still sleeping.  She pretty much freaked out telling him he shouldn’t still be sleeping and returned home to find her other son dead while the boyfriend acted unconcerned and was playing with her dog.

I’m not going to judge the mother.  It’s not up to me.  That right is up to someone in a much higher power.  I did really enjoy my boys when they were sleeping and I did look in on them all the time. Even when they got to the age when I wouldn’t have needed to peek in on them, I still did.  But that’s just me.  I’m not saying anyone else has to do that.  I’m not blaming, I’m just saying I’m different that way.  Heck, if they still lived at home with me, I’d probably still peek in on them on my way to bed but I’m a known worrywart.  Did you ever see Terms Of Endearment with Shirley McLaine, Debra Winger and Jack Nicholson?  Before the movie even starts it shows the mom, McLaine, trying to see if her baby is breathing and she can’t tell so she pinches her and the baby cries so the mom is happy and goes to bed.  I wasn’t that extreme but……..It was something that came to mind every now and then.

This woman is now married with 4 sons and this Lee person got 19 years in prison.  The autopsy on the second boy showed that “someone stopped him from breathing” and Lee figured he’d get convicted of both murders so he plead guilty to the second one. He’s eligible for parole in 2012. There is no law that says anyone needs to be notified if he moves into a neighborhood with children. That is only in place for child molesters.  ALRIGHTYTHEN!  This woman wants there to be a law that will inform potential neighbors of his crime.

I need to borrow K. Trainor’s 2×4 from uglyassopinion to seriously hit someone over the head.  I pretty much have steam coming out of my ears and my husband had such a tirade that I can’t even print what he had to say.

My question isn’t about notifying potential neighbors but it’s what in the name of all things holy are we doing letting this man out of jail? He killed two beautiful little boys. He got 19 years???  It doesn’t say how long he served but in my opinion, his lifetime wouldn’t have paid the price.

I know some of you will have plenty to say about this.  So, what’s your take????