I got new glasses this last time I went to get my eyes checked. I didn’t get new ones last year since I 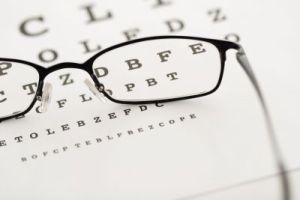 really liked the ones I had before and my eyes hadn’t really changed enough to warrant the expense.  I did splurge on a funky pair of sunglasses though.  So this last time I went in, I needed a new pair just because two years of wearing the same pair 24-7, they were in kinda bad shape.

So I picked out a new pair with the help of one of those ladies who help you.  I got them measured and waited for them to get here.  I got the call and went to pick them up.  I really liked them and they were cute. She put them on me and they felt “okay” and off I went. I didn’t wear them home because I needed my sunglasses so when I got home I put them on and thought “wow, these are cute.” They were a root beer color and a cream color kind of swirled together.

After a few hours they felt really weird.  I looked in the mirror and they didn’t look right.  I adjusted them and I knew something was wrong.  The left lens was sitting against my cheek and the right one, my eyelash was hitting the lens.  I was really irritated.  I’ve been getting the progressive lenses now for roughly 7 years and they are really hard to adjust to so I just hate getting new glasses to begin with.  But something was really wrong with these. I put my old ones on and didn’t go back for a few weeks but when I did, I got my favorite lady and she told me to put them on to which I did and she looked at me and said “those glasses will never be able to be fitted for your face, the bridge doesn’t sit right on your nose!”  She said it was no big deal and I could just pick out another pair and we’d call it a wash.

What I want to know is what happens to that old pair?  The lenses can’t be used for anyone else.  Who in the world would have the same prescription as I do?  I’d like to know why that first lady didn’t tell me that in the first place and why would she measure me and not notice that?  Isn’t that her job?  My lenses cost over $300. Isn’t that kind of a costly mistake to just say “no big deal?”  Is this a part of the reason that glasses are so expensive?

I always keep my most recent pair as a spare but I always take my older ones there and they donate them to people who can’t afford glasses.  I talked to my eye doc about it once when I was there and I asked him how do other people wear someone else’s glasses?  I always thought it could really hurt your eyes to wear the wrong prescription.  He told me it’s just about getting them as close as they can and he belonged to a group of doctors that go to other countries to give eye exams and hand out these donated glasses. That it would be that or nothing for some of these people.

But as much as I like donating what I don’t use anymore, I felt like this was a very costly mistake and in the end, don’t we all end up paying for mistakes like this?