First let me start out by saying that this innocent looking little thing has quite the attitude. We were talking about going to our local Business Expo and I knew there’d be wine there and I KNOW how she likes it so I thought we should leaver her home.  This is where I found her.

She snuck into my purse and SHE WAS ON THE PHONE!!  She wouldn’t say who she called so I guess I’ll have to wait until I get the bill!  It better not have been another country!!

Then it occurred to me she didn’t want to sleep alone and thought she was sleeping with Maddie so I left her be for the night.  When I said good morning to her the next morning and reached in to pick her up, she spoke to me in a language that I’d never heard before and freaked me out.  I didn’t know she “talked.”

Early the next morning we decided to bring her with us but said we’d keep our eye’s on her at the Expo.  She hopped right in and made herself comfortable. 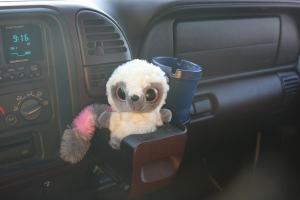 We stopped to pick up Toby and Christopher on the way and she zoomed towards Christopher while Grandpa buckled him up and wouldn’t leave his side.  I think she’s a little flirt! 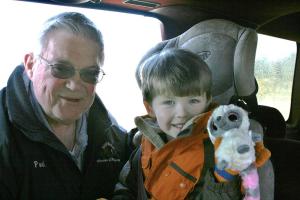 We had to restrain her at the Expo so Trinity tied her to a balloon so we could see her.  She gave me some lip about being under house arrest and I told her I was boss while out and about and she could play when we got home.  You should have seen the “look” I got!   She didn’t look to kindly at Trinity either.

She kind of pouted the rest of the day and the next day she wanted to go outside.  It was wet and windy but she wanted to explore the Minnesota farm land.  She went right up to that bird house and yelled inside YOOOOHOOOO’s here and out they flew.  She was quite pleased with herself.

Then she thought riding on the deer would be fun since she saw Christopher do it.  I couldn’t help but laugh at this one.

She was begging and begging to go 4 wheeling but it was just to muddy so Toby got this out for her and it started right up.  She is the QUEEN now.  Look at that smile.

Then she wanted to go with the kids so they went along with it. 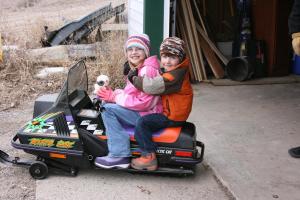 What happened next gives me nightmares.  She hopped on and took off. 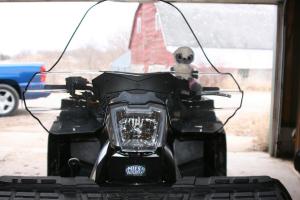 Then she talked the kids to letting her take them for a ride.  Look at my nice “clean” wheeler?!?!?!  I about had a conniption!!!

This is when I threw my hands in the air and came in the house and left the guys to deal with her.  She thought she was one of the Bud Girls and even posed with them! 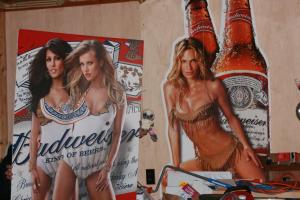 She’s now on her way to jj.  Beware of the innocent look because this one is NOT innocent and really has a mind of her own!!!

10 Responses to YooHooooooo in Minnesota