Don’t think about it 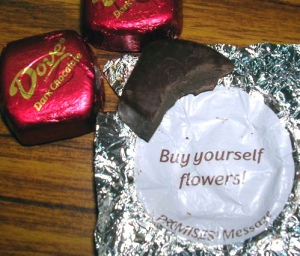 Have you ever thought about serendipity?  About things just, well, happening, when you need them to?

Lately, I’ve been going through a difficult time, and I’ve been thinking – nay, obsessing – over it.  What should I do?  If I make decision A, how do I handle the details?  What about decision B?  How will THAT decision play out?

And then, today, I opened a little Dove Dark Chocolate Promise (Heaven in a 1 inch square), and inside the wrapper, it said, “Don’t think about it so much.”

What would happen if I just put aside the thoughts of It for a day?  Would my world crash around me?  Probably not.  But nothing would get solved.  Still and all, the idea of it gave me a few moments of peace.

And then a strange thing happened.  Every time I started by obsessing, that little quote popped into my head.  “Don’t think about it.”  It was like a mantra.  And I’ve never had a mantra before.  Well, not before about a week ago…..

Last week was a difficult one for me and Josh.  It was the last week of school, there was the nip of summer in the air.  He was resistant to going to bed when the sky was still lit with full sun, and he didn’t want to get up and get dressed to go to school.  He wanted to play with his cars, and ride the dog.

One morning, things got contentious.  The more I said, “hurry up”, the slower he moved.  I pushed, he pushed back.  He’s a stubborn one.  Can’t imagine where he gets it.  I threw everything I had at him – taking away toys, threatening to have him sit if he missed the bus, even a spanking.  I was seeing red, and black, and getting lost in a fog of mad.  And he was, too.  I felt like chewing nails, I was so angry.  Finally, I got him in his clothes and out to the bus in time.

When I returned home, I made a cup of chai and sat at the computer.  I opened my Google home page, and there was the quote of the moment, “Violence is the last refuge of the incompetent,” Isaac Asimov.  And that quote stopped me dead in my tracks.  Because even though the confrontational morning hadn’t turned violent, I was feeling a little violent.  I felt like slamming doors, throwing things in my frustration.  I specifically did not spank Josh, because I was that angry.  I didn’t want to hurt him.  I will spank him, but only when I’m in control, and can do it dispassionately.

Since then, my dealings with Josh have been calmer.  Whenever I feel the frustration welling up – and we all know it will, he’s five and full of himself – those words come back to me, “violence is the last refuge of the incompetent.”  And I realize, violence comes from losing the cool.  Another mantra is born.

More and more, I am aware of these things.  Perhaps it’s the upheaval and transition that my life is in right now.  Perhaps I’m growing up, finally.  Maybe it’s God, talking to me.  Heaven knows, I’ve been asking, begging, enough lately for help.  Whatever it is, it’s pretty darned cool.

Am I alone here?  Do you find yourself having serendipitous experiences?  Do you think, at times, that God, or The Universe, or Fate, or whatever, is trying to tell you something?  Or help you along?

17 Responses to Don’t think about it