When is it time to stop driving?? 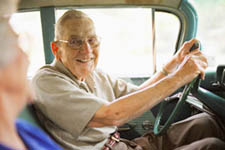 This is such a sensitive issue but one that I’ve been thinking about a lot.  When is it time for someone to surrender their drivers licence?  I’ve done some reading on it and here are two articles in case your interested in reading them.

Me myself, I know I won’t be driving forever.  I can’t really drive at night now and if it’s raining, snowing or foggy, I have a really hard time.  This was one deciding factor as to why I’m not bowling this year.  I can’t see right and I get paranoid thinking I’ve seen something move that I drive like a snail and I can actually feel it in my heart that I’m scared.  But that’s me and it’s my choice right?  Or isn’t it?

What about a parent who you know probably shouldn’t be driving anymore or at least not for much longer?  What do you do then?  Both of those articles gave check lists of monitoring someones driving but what if you don’t know what they drive like?  What if you are never in the car with them while they’re driving?

I know my mom has trouble with her eyes.  She can see far away but not really close up.  Not the “old age” syndrome but an eye disease.  She has macular degeneration.  She can see some things very clearly but not things like signing a receipt or reading books.  But she can golf and do things like that.  She failed her eye test for renewing her licence this past April so she had to send her ophthalmologist a letter and he had to sign it if it was “in his opinion,” okay for her to drive.  Now I’m thinking the hard part would be done for me but oh no, he signed it.  I asked her what the conditions were thinking that he’d specify that she could only drive during the day with no precipitation or anything like that.  She doesn’t drive at night or when it’s raining or snowing anyway so I thought it would ease her into giving it up all together in the next year.

When does a person step in and take something away from a parent like this?  Both of those articles stated accidents as a guide but I’d sure hate for there to even be one in the first place before making a decision like this.  What if she really hurt someone or hurt herself?

My daughter in law Nikki was in the car with her last Sat and she said she’d never do it again.  She drove very “jerky” and one thing that really has us all bothered is she would stop, on a main highway but in a 30 mph speed limit in our small town, to let people who were waiting to get out of the bank or store, and let them out.  Meanwhile she’s stopped dead on a highway.  My thought is she’s lucky to have not been rear ended before now.  I mean really, you can’t just stop to let people out on a highway.  It wasn’t like she slowed down in a yield, she just stopped.

So, how does a person do this gracefully?  How do you take something like this, freedom and independence away from a parent or a loved one?  My mother will not take this kindly.  She’s stubborn and she knows it all.  I know in the end the decision will be left to my brother and I but I hate to hurt her in any way.

Has anyone experienced this yet?  It’s very sad and it’s going to be hard and I’m not sure what’s the right thing to do.  I know all people are different and she’s got all her faculties.  The only problem is her eyes and maybe that’s why she stops.  Who knows?  But I know I don’t want her to hurt herself of anyone else before we think about this seriously.

Have any of you experienced this yet?  Going to have to face it soon?  Any suggestions would be very appreciated.

9 Responses to When is it time to stop driving??