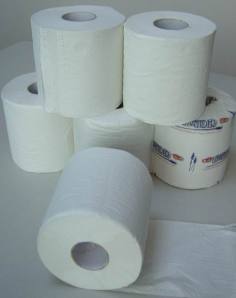 So there I sat, while on vacation, taking a little “break”. I looked over at the wall…. Ahhh, a new roll of toilet paper. Pristine… untouched…. And completely sealed.

I reached over, grasped the little ‘tail’ that the company so graciously left for me, and gave a little tug. And the paper shredded. This is two-ply, mind you, so only the top layer shredded. The second layer remained firmly attached. So I tried again. Grasped the second layer by the same little tag, and tugged. It brought up the first ply of the next layer. And not only that, it tore about two inches up the roll, leaving most of the rest of the first square firmly sealed to the roll.

Now I had the beginnings of a shredded disaster on my hands. I believe in preserving toilet paper – I’m neurotic about it, actually… being the proud owner of a septic system, I’m very aware of the havoc too much toilet paper can cause. So I hate to tear off more than I need.

I tried again. This time, I tried to separate the first square of two-ply from the second layer of paper by weaving my finger under the second ply, but the seal was just too tight. Damn those Quality Control Experts, and Damn that good ol’ American Work Ethic! Where is a slacker when you need him? Because now, not only was it too tight to fit my finger in under that crucial second ply, my fingernail caught on the second layer, and SHRED! Again! CRAP.

I was getting frustrated now, and more determined that I would prevail. It’s important to me to unroll toilet paper the proper way – to unseal that first square, and take it off the roll in the proper manner. (I don’t know why. It’s a quirk. One of many that either make me lovable or nuts. You decide.) But this roll just would. Not. Cooperate!

By now the entire first square was shredded, as was the corresponding square on the second layer, and I was well into shredding the THIRD layer, not to mention the second square on both top layers. It was becoming a mess, and I was getting just a little insane.

And my butt was getting cold.

In a final effort, I tried the Finger Weave one more time. Resigning myself to wasting at least one whole revolution, I worked my finger under the second layer (that’s four plys, people, FOUR!), and around to the perforation. Gently, oh so gently, I pried my finger up, against those perforations. And…. SHREDDDD….. it looked like it had gone three rounds with an over-nipped cat.

By now I was ticked. I ripped, I shredded, and FINALLY broke through that infernal seal, all the way down to the FOURTH LAYER. I finished what I needed to do, and exited, victorious. I had subdued the seal. And probably clogged the septic out of spite. I would have gone back and taken a picture, because I really did leave the roll in shreds, but I was afraid people would think I was crazy….