How long do friendships last? 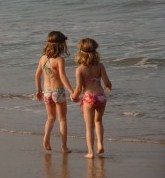 How long have you had certain friends? Do you have any from childhood? This was a Good Question the other night and I found it fascinating. I’ve got one friend, Kerry, that I’ve seemed to know all my life. Since 1st grade. I haven’t seen her in many years but we do talk quite often. What’s so funny about this friend is there is no “pretending” to be anything that I’m not. It’s almost like we get right back in our groove. She knows the “me” from then to the “me” now. She’s really the only non family member who came to see me when I had both my boys in the hospital. When I had other things wrong, important things, she’s always been there. I could call her right now and talk to her for an hour. Even though we don’t see each other “in person” very often. She lives in AZ and I live in MN and it just doesn’t happen often that we are both in the same place at the same time.

This news story talked to many people and listening to the high school kids was kind of funny the way they said they were going to be friends for-EVA!!! Sadly that just doesn’t happen very often. Every once in a while it does but not very often unless neither of you ever move from where you grew up. That was another thing they talked about: location.

Location seems to be key to early friendships but not so much in lifelong friendships. If you really know someone and are really good friends, it didn’t seem to mar the friendship. They said they traced people’s friendships for 7 years and 30% of the participants stayed friends.

One more thing that was really emphasized was a lot of people misuse the word “friendship” and the word they really should be using is “acquaintance.” A lot of people consider a lot of people they just know, as friends. One man first said when asked that he had “tons” of friends and the interviewer then asked things like do you go to dinner and get together at each other’s houses and the man just looked blank and said “no, nothing like that” and then he said maybe he had a few friends.

So, do you have many lifelong friends? How many friends would you say you have? I do have to say, I don’t have “that” many friends. I have a whole lot of acquaintances that I’d do anything for but when I need to vent about something really lame and dumb, there are only a few people that I’d feel comfortable to call.

23 Responses to How long do friendships last?