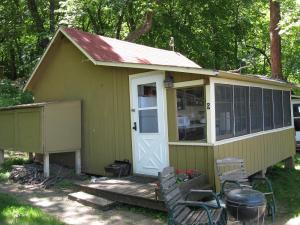 I’ve been wanting to do a post about this for quite some time but I didn’t want everyone to tell me that I used to be “cabin people” so I never did but it was on Good Question the other night so I thought, what the heck.

We used to have a cabin not far from where we live now. It was in Paul’s family and we shared it with his 4 siblings. It got crowded at times and there were some pretty petty arguments but all in all, we all loved it. We went up there every singe weekend come rain or shine. From the time the snow melted in the spring until it was just to cold anymore, we were all there. I think my boys could tell you what happy memories we have of that cabin.

Paul’s family business moved locations and was only 30 minutes from the cabin and he’d been driving back and forth so we decided after Jason graduated, we’d move. Toby wasn’t to thrilled, he was in 9th grade and painfully shy but that’s another post. Upside of that was we were neighbors of Sue’s and we all know how that turned out so I think he’s okay with it now. Since the business moved, so did all of us so now we lived so close to the cabin, it just wasn’t the same and it wasn’t being used enough so we sold it. How now I wish we wouldn’t have.

Living in this kind of tourist country really has some drawbacks that I never really thought about. For example, going anywhere on a Friday is just plain out of the question. From early in the morning, there’s some pretty terrible traffic happening. Since I take Bailey home now after golf lessons on Friday, I can’t believe how early that traffic starts.

The grocery store is just plain nuts. If you want groceries, you’d better have them by the weekend or your store won’t seem like your store. You can spot “those people” a mile away too. Us “normal” people put on decent clothes to go about doing our business but these cabin people think it’s okay to walk around the town and stores in varying disarray of costumes. I’m convinced some of these people think they are in the tropics with some of the hats and bright shirts and the “Hawaiian” type clothes. Then you have the people who only run in for “one” thing in swimsuits wrapped in towels. Alrightythen.

I guess we did that too now that I think about it. We had our “cabin clothes” but we never went shopping in our bathing suits. We were always polite though and respectful of the people we encountered on our trips. I guess either you’re that way or you’re not.

What I’ve encountered the last few years is that there are some pretty rude people out there. I have been forcing myself to stay out of town and out of most of the stores from Friday till Monday just because I can’t stand the crowds but last Saturday we stopped in on our way to Bailey’s birthday party and I went to my favorite cashier even though the line was a little longer. When it was my turn I smiled at her and asked her if it was winter yet and she just rolled her eyes. Last fall I went in and she was near tears with the rudeness of some of these people. Some woman yelled at her because she wouldn’t cash a check for $50 over the price of her groceries. They have a sign right there saying only $10 over is allowed. It only takes a few of people like this to ruin your day and you have to be nice to them. I’m sure the store LOVES the cabin people. Well on Saturday, some rich woman from a ritzy part of Minneapolis tore her a new a@@ for not bagging her groceries. She calmly told the woman they don’t do that here. Well the woman huffed…..it’s what they do at our store at home. You can just imagine what she would have liked to have told that woman can’t you???

My moral of this story is to just be nice to people. We are living in this world together and it shouldn’t matter where you go or what you’re doing, be kind and nice to people. What you do and how you act can really make a difference in some people’s lives. Slow down and relax. Everyone is in such a hurry. Take the time to be courteous to people you meet along the way.