What do you do with your change? 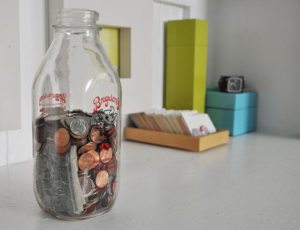 This thought ran through my head the other day. Do people carry all their change with them or do they put it in some kind of container? Both Paul and I put all our coins in a big bank. We saved it for years and years. It’s funny, once both kids grew up and moved out, it started adding up. He took all our lose pocket change to the bank 2 years ago and there was a staggering $800 in there. We were just floored. That’s a huge amount of money.

I know my dad did this also. He had coffee cans in his closet the whole time we were growing up. One can were coins he wanted to save because they were old or rare and the other one he just dropped his coins in that he didn’t want jingling in his pockets. I do have to say, we took money out of there and I’m sure he knew. Just like we knew our kids took change out of ours. If it’s not adding up, it’s being taken out.

My grandparents saved the “coppers” as they called pennies. They would play cards with them but spent the other coins and always carried them. Of course that was before Loonies and Toonies. Those are the one and two dollar coins that Canada now has. I know MANY people who drop those in jars too because they are to heavy to carry in your change purse.

I now only carry a few quarters. When I bowled I did carry a few of each coins for due’s or the pot we had while bowling but I hate all the change in my wallet and I LOVE the way it all adds up now that it’s just Paul and I.

What about you? Do you carry your change or do you put it somewhere and save it?

15 Responses to What do you do with your change?