Changing how we blog 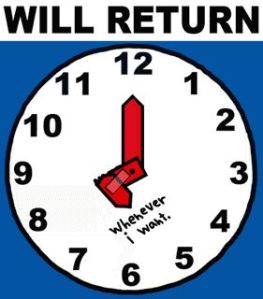 I never thought I would do or say this. I love blogging and have had a great time doing it but it’s just gotten to the point that’s it’s not easy doing it anymore. I feel the biggest thing is we aren’t having the “conversations” we had in the beginning. When people are talking back and forth, it’s fun and it’s all worth it.

On Monday July 27, we had 512 hits and 33 comments. On Tues July 28, we had 522 hits and 20 comments. Then on Wednesday July 29, we had 645 hits and 25 comments. So that’s a three day total of 1679 hits and not even 100 comments. Now this either means nobody likes what we are writing or just aren’t taking the time to make comments. Or that people are just away doing other things but the point is, we are getting the hits but nobody is saying anything. I also know a lot of our regular commenters are away on vacations and such and the people who do come everyday but don’t comment are still coming but it makes us feel like nobody is talking.

The only reason I started to blog in the first place was to talk to other people and now that’s just not happening. The payoff in blogging, for me, is the commenting back and forth and if that’s not happening, I’m just not interested in keeping it up the way we have been. I’m not shutting it down but rather just not putting new stuff on everyday. It’s just way to time consuming for me and to the other writers and we feel if nobody is saying anything, maybe we just aren’t as interesting as we used to be. That may not be how you feel when you come to read but that’s how we feel when we take the time to write and then nobody says anything. Honestly, when one of us writes a post and it doesn’t get many comments, we feel it was a crappy post. We feel bad.

Think of it this way, if you worked hard planting a garden and then the harvest went to waste. Everyone looked at your garden and told you how beautiful it was but nobody wanted to eat your food. It’s really hard thinking of things to write and do the Question Of The Day 365 days a year and you may answer it in your head or to your spouse or whoever is sitting in your living room but we don’t know that so we think what we wrote wasn’t anything anyone was interested in so the payoff isn’t there for us anymore.

So I hope you will come back and check on us. Maybe when fall and winter hits things will change. We’ll see but in the meantime, we’ll still blog, just not new stuff everyday.

49 Responses to Changing how we blog