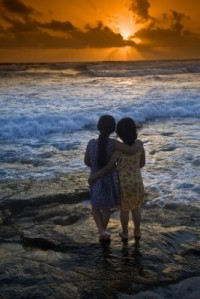 My strongest bond is and has always been with my oldest for obvious reasons. The other two can’t understand it. I’ve tried to explain to them. It’s not about who she loves more. We have shared our entire lives with one another and have remained a constant in each other’s lives. They all haven’t. They don’t call each other but they all call me and complain about it. Except Missie. She’s never complained about not talking to the other two. She’ll come right out and say it, I am her favorite. She feels like I am the closest thing to our dad she has. When something is wrong, she calls me. When something is great, new and exciting, she calls me. This I can’t help. I have been hearing for so many years, why doesn’t Missie call me? Well I don’t know, ask her! I’m actually getting tired of it and I don’t know what else to say to them. I can’t make Missie have a relationship with them. I can’t make her call them. I do feel bad when Missie says the things she does but I don’t tell her to stop. I call all of my sisters but when something important happens or when I’m feeling down, I call her. We have a bond that the others don’t and I don’t feel it’s mine or anyone else’s fault. We are more alike than the others. We grew up together and we are almost the same person if you ask her children!!

Now Christmas is coming up and Missie and her family are planning on flying here during the school break. I haven’t told the others and I’m kinda afraid too. I already know what I am going to hear. “Well she doesn’t come to see me, she doesn’t even bother calling me!” UGH…I can’t handle it anymore!!! What do I do?? I’ve talked to her about it and she just doesn’t feel close to them one bit.

For my birthday Missie sent me a card that said…”A sister is…our first roommate, our first playmate and our first best friend.” Well we were that for each other and I don’t feel like I should give that up or make Missie feel something she doesn’t. It just doesn’t work like that. I wouldn’t give up my relationship with her for anything in the world and I’m sorry that the other two don’t have that with her. They have that more with each other because they grew up together. Why don’t they see that and let it go? I’ve learned so much in my life and in the last year especially. As hard as you try you can’t make someone feel something they don’t. You can encourage it and hope for the best. Why don’t they call her and ask her themselves instead of asking me!? I’m always defending my relationship with her. Explaining it over and over and over! Why should I? I just want to say them, ask her yourself! Don’t make me feel bad that she calls me. Don’t make me feel guilty that we were raised together. You can’t turn back time and change it. All you can do is look forward and try and change that. I honestly feel like if they approached Missie with all of this, some of it could be solved. I’m tired of being the middle man here.

There aren’t too many people in my life I feel have unconditional love for me. I’ve never had a doubt with her. Why should I have to defend that???

11 Responses to A Sisters Bond