Even Miracles Take A Little Time 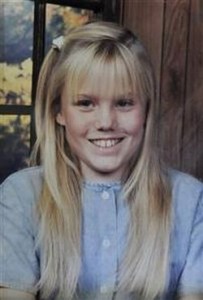 I’m sure everyone has heard about the amazing story of Jaycee Dugard. Kidnapped as she was heading to the bus stop one morning in 1991, all the while her step dad watching helplessly. I remember when this happened, we’re the same age. And like most people I’m sure we all assumed she was gone forever and had forgotten about it. I did, I had forgotten until I heard the story that she’d been found and alive none the less. I was shocked and so happy for her family. Could you even imagine, your daughter, niece, cousin being kidnapped and assumed dead? Then to find out 18 years later she’s alive and has two babies of her own. I cannot fathom it. The story about who did this to her and what this poor girl went through is heart breaking to say the least. She now has two girls by this man that raped her repeatedly through out the years. To think, those two little girls find out the girl that they called their sister was really their mom. I can only wonder how she feels about him, about herself.

My question is this…how do you hide someone for 18 years??? How do you manipulate someone to believe twisted lies and never try to escape? I guess anyone around me could be doing this. How would I know? Someone would have to know something though right? The cops were called to this house a couple times on reports of people living in tents in the back yard yet no police officer ever entered the back yard or the house. How, why?

What makes me the most sick out of all of this is he’s supposed to be in prison. For what? Federal kidnapping charges, sentenced 50 years in 1976 served 11 and 3 years later Jaycee is missing. Sick, twisted, wrong in any and every way possible. This could have been prevented and because this man has such a horrific back ground why in the world would they not throughly check things out?? I have such a hard time understanding this! This innocent 11 year old girls childhood had been ripped away from her. She’ll never be “normal” and that’s just being honest. This girl will forever be scarred. Not to mention her daughters? This cruel and insane world is all they know, this man they call dad is all they know. No schooling, no real interaction with the real word.

I cannot and will not even try to understand any of it, what kind of person does this? It’s inconceivable to me. I’ve been face to face with monsters in my life but it doesn’t even compare to what Jaycee Dugard has gone through. I hope with all my might that she will someday find some sort of normalcy in her life. Miracles do happen, not too often, certainly not often enough but even miracles take a little time.

7 Responses to Even Miracles Take A Little Time