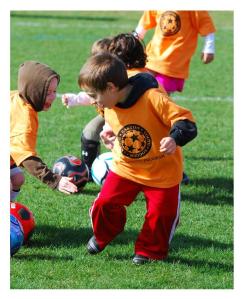 I remember when my boys were young and a few people told me I had them involved in to many things. I didn’t think they were. I saw this on a special report the other night and started to think about it.

This report reminded me of my niece who danced ALL THE TIME. Everyday she had dance. Not only did she have dancing but it was at “the best” dance studio in Minneapolis and wasn’t anywhere near their home. There was a lot of driving involved not to mention the money spent. But it’s all she got to do. Like the gymnast in the story. She finally got tired of never doing anything with her friends so when she got to high school, she quit dance and got to do everything in high school and not just dance.

My kids started out playing an instrument and they both played baseball. Jason played hockey one year and then switched over to basketball. Toby tried a bunch of different things like wrestling, karate and he really liked his guns. They also had Sunday school and confirmation. They only did one thing per season.They both also had swimming lessons all winter at the jr high school. I guess my point is that we didn’t race from one thing to another and they only did the things they wanted to do. I never made them do anything but they did have to finish what they started. Toby hated basketball but I made him finish the season and told him he didn’t have to play again.

19 Responses to Kids and burnout