Someone Has To Say It

You knew one of us had to mention it.

On Christmas Day, the Panty Bomber was half successful in blowing up an airplane while traveling from Amsterdam to Detroit. Because of that, the Obama Administration and the TSA are all in a dither, and regular people are being detained and patted down more than ever. More freedoms and liberties are being eroded by the minute. Passengers are arriving four and five hours before their scheduled flight, rather than the two to three that are recommended by TSA and the airlines. Why? Because we are so freakin’ Politically Correct that we will not face this problem head-on.

And because this is my little forum, I can say, yeah, I have the answers. Not all of them, but better ones than are currently being exercised.

First, let’s start profiling. [pauses for collective gasp of horror] The two-year-old baby in his mother’s arms is not carrying explosives in his diapers. Not the gunpowder kind anyway. “But what if….?” Look at the baby. Pale skin? Check. Blonde hair and blue eyes? Check. Still not sure? Look at the parents. They also are pale-skinned, with blonde hair and blue eyes? With the last name of “Smith”? Southern accent and spent their entire lives in Mississippi? They’re not Terrorists. Let them pass. The guy behind them, with the swarthy skin, the newly shaved facial hair, and the shifty eyes? Yeah, that one, who says his last name is “Jones” but he can’t pronounce it, and he bears a striking resemblance to the guy on the Watch List with the alphabet soup as a last name. Yeah, he bears a re-check.

I’m not a trained TSA Worker, or an FBI Agent, and I didn’t even stay last night at a Holiday Inn Express. But I can tell you that the baby is not a terrorist, and the other guy trips more than a few warning buttons. But who is more likely to get searched? The mom and the baby, because we don’t want to offend Bomber Boy with the shifty eyes, because he’s dark-skinned.

Here’s another tip: stop with the shoes already. That’s been done. And now the underwear thing has been done, too. Strip-searches, pat-downs, full body scans… these things are going to stop us, the traveling public, from flying. They will not stop the nutjob fanatic who has no qualms about swallowing the explosive, or about placing it in other undetectable places. They’re going to die anyway, what do they care? Here’s a suggestion: look at the hijacking attempts in recent memory that have been thwarted. What stopped them? TSA? No. The FBI? No. Endless lines, pat-downs, x-rays, and restrictions on how much shampoo you can carry? No. The passengers stopped them. Passengers stopped the Panty Bomber. Passengers stopped the Shoe Bomber. Even on 9/11, passengers tried to stop that hijacker, forcing the plane to crash into a field rather than into more buildings. And yet, our “fearless leaders” are using the TSA to thwart the passengers at every turn. They take our nail clippers, but let some mope through with his grundies stuffed with bombs. And then that mope is overpowered and stopped by a bunch of “helpless” passengers. 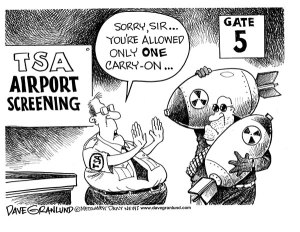 Let’s leave the passengers alone. Let’s let them take their nail clippers on board. Let’s allow them to keep their pocket knives, their sewing scissors, even the occasional side arm. Why? Because most likely, the people carrying those things are not going to use them for evil. Until this War on Terror started, very few people eyed a two-inch pair of thread scissors as a deadly weapon. People still don’t. Now they’re an annoyance. And the guy who has a Concealed Carry permit knows how to carry and use that weapon. And he will not pull it out unless it is absolutely necessary. And then he will use it. And in that situation? I’d rather die trying to live than die with my hands shackled by TSA. Especially when the terrorist’s hands aren’t shackled.

24 Responses to Someone Has To Say It