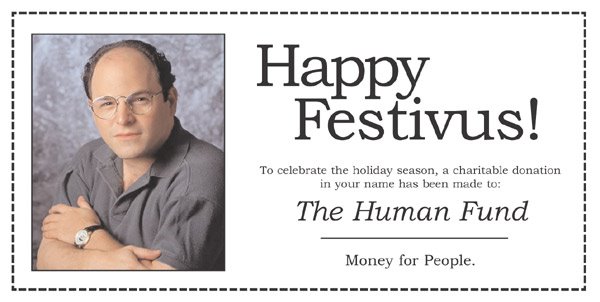 I have a question about Christmas Gifts.  Now that we’re well past the recent “gift-giving season”, and far enough away from the next one, I think this is a good time to bring this up.

What is your stance on making a charitable donation in someone else’s name, and giving that as a gift?

This is what prompted my question.  It’s a question/answer from the “Dear Prudence” column of the website Slate.com:

Dear Prudence: I have a family member who sends a gift of some animal to the Heifer fund as a Christmas present to us every year. Every year I get more and more offended, as this is not a “gift” to anyone except themselves, as they get a tax deduction. My kids understand about giving to charity, but I cannot explain how this is a “gift” to us. I would like to tell this person to please stop sending these donations as “gifts” and only a card is fine.

D.C. Metro (response): What a good lesson for the kids! A family member makes a contribution in your family’s name to a wonderful cause, and you want your children to understand this isn’t really a gift but a tax deduction, and you want to demand a refund from the giver. Unless you have some moral objection to helping the poorest people in the world obtain farm animals, be a good example to your kids and tell them this is a generously spirited gift and have them help you write a thank-you note.

On one hand, I completely agree with Prudence’s response.  Accept the gift graciously, and explain to your children what Heifer International is, what they stand for, and what they do.  It’s a wonderful thing that your name is attached to helping others who are in dire need.

But my question is this:  If you donate to a charity in another’s name, how do you decide where to give?

Perhaps your recipient doesn’t believe in Heifer International.  Or Unicef, or the Red Cross, or whomever else it is that you passionately support and make a donation to, “in their name”.  Frankly, I wouldn’t want any donations to be made in my name to the United Way.  Why?  Because I don’t agree with the way they work.  I’d rather give directly to a particular charity, than go through the “clearinghouse” that is the United Way.

But would I gripe if someone made a contribution to them in my name, as a gift to me?  I don’t think that I would… I would be disappointed, of course, but manners would prevent me from saying anything but, “thank you, that’s very generous.”  But on the inside, I may be reacting exactly as “D.C.Metro” did in the above letter.  I would prefer a simple greeting card than to have my name attached to a ‘tax deduction’ to a charity that I do not support.

Does that make me a bad person?  No, I don’t think so.  But it does place me in the minority, I think, of people who give to charities in another’s name, and then expect the same standard to be applied when doing the same in return.

My dad is the kind of person who tells everyone, “don’t buy me ANYTHING for Christmas.  I have everything I want.  If you must spend money, donate it to someone who needs it.”

So we do.  One year, my brothers and I donated to a local church group that my dad works with.  He goes around “alley junking” bike parts, and assembles them into really nice bikes, then gives them to this church who, in turn, either sells them for a very low price, or gives them for free, to kids/adults who need a bike.  After that group folded, I made donations to Wounded Warriors in his name.  (I’ve since quit, because I really believe they are spending more money sending me pens, pads of paper, pennies and stamps, in an effort to get more donations from me).  But each time I’ve made a donation in my dad’s name, it’s been to a charity that closely mirrors his personality and beliefs.  I would NEVER consider, for example, donating to the NAACP in his name.  Why?  Because he doesn’t believe in the work that they do.  His opinion, and I respect it.

So why would I be thankful when someone makes blanket contributions to their pet charity in my name?  That situation becomes what D.C.Metro is talking about: a tax deduction for the giver, and frankly, nothing but headache for the recipient.

It’s a weird position to be placed in, and I think that “Prudence’s” response was the appropriate one:  say thank you and move on.  Perhaps, if you feel passionately enough about it, talk to the gift-giver and say, in a very respectful way, “I appreciate you making a donation in my name, but, in future, I prefer these charities that are different from yours.” (Although I don’t know if there is any ‘respectful way’ to say that, now that I go back and re-read it.)

9 Responses to Charity or Deduction?