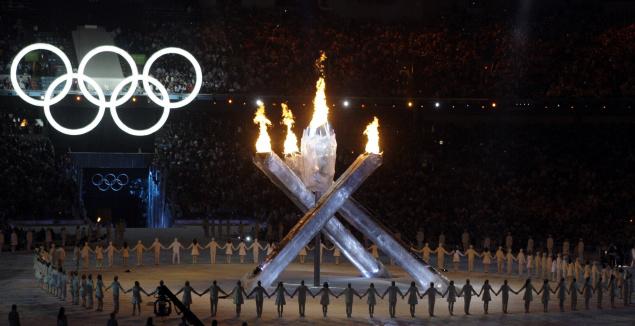 Friday, February 12 found my family scrambling a bit!  It was my FIL’s birthday (Joy’s husband Paul!) so after a day of working, we headed out for supper to celebrate.  As we were enjoying our meal,(as much as we could without Jason, Nikki and Bailey-missed you guys!) we started talking about the Olympics and how excited we were to watch them and then it dawned on us.  Opening Ceremony!  That night!  Must eat faster to get home in time!  LOL!

No, we didn’t shovel our food in or drive 90 mph to get home, but we did want to see the ceremony and we made it in plenty of time.  We were able to see the pre show and see the highlights of some of the athletes.  (Prayers to the family of the Georgian luger who lost his life pursuing Olympic greatness.)  As the actual ceremony began, my 9-year-old daughter says, “I want to be an Olympian.  That looks neat!”  My response, “Pick a sport!  Any one but luge, but pick a sport and you never know what might happen.”

Now, I know the reality of her actually becoming an Olympian, but who am I to squash a dream?  Dreaming never hurt anyone!  I just thought it was so great that she thinks it’s so great to achieve that level of athleticism.  I can remember as a kid becoming just as excited when the Olympics were on TV.  I can remember wishing I was one of those hopefuls.  Wishing I was good at something.   Pretty soon my 5-year-old son was in on it too.  He was “speed skating” around the island in the kitchen!  It was so adorable!  He was bent over, arms and legs going  just like they skate.  I asked what he was doing and he said, “I’m speed skatin’ mom!”

There is an excitement about the Olympics that no other sporting event brings. Maybe it’s because you can win a  gold medal and be the best in the World. Maybe it’s because people from all across the globe are peacefully gathered together in one place.  Or maybe it’s because we  feel united as a country, cheering together for one team.  Whatever it is, I hope that excitement never dies and Olympic dreams become reality.