Jesse Ventura. What do you think? 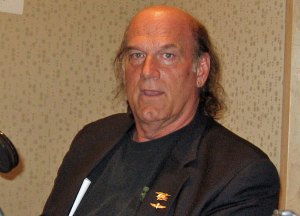 Ah, Jesse Ventura. Former Governor of uh, um…….my state of Minnesota! Is this guy a kook or what? I mean really. Have any of you heard him talk about his new book? “American Conspiracies: Lies, Lies and More Dirty Lies the Government Tells Us.” He was on WCCO this morning. I’ve seen him on other things too but this morning he sounded more nuts than ever.

I think  he was an okay Governor. In the whole scheme of thing things, he was “okay.” He got people out to vote that’s for sure. It was also one of those elections, at least for me anyway, where you didn’t vote for someone to win, you were voting for someone not to win. Both my kids voted for him. I can’t say I did but again, he was okay. But then, at least didn’t look like a madman with all that hair all over the place. Someone really needs to get a hold of some scissors and do something with that hair because quite frankly, I can’t take much of what he says seriously when I’m looking at him. He looks like Doc from Back To The Future and I mean no disrespect to Christopher Lloyd. Esme Murphy asked him if he was thinking of running for office again and he said “watch the hair, if I cut it, I’m thinking about it. You can’t have hair like this and be in politics.”

Here is a book review I got from Amazon. “Former Minnesota governor, navy SEAL, and pro rassler Ventura has a new truTVshow investigating but not necessarily debunking conspiracy theories. This companion to the program, a sort of teaser, dissects such famed objects of unending speculation as the JFK, RFK, and MLK assassinations. Ventura concludes that none of those were twisted-loner crimes but rather resulted from conspiracies of varying vastness. Anent the 9/11 terrorist attacks, Ventura asserts that “our government engaged in a massive cover-up” and had “ties to the hijackers.” He ventures that “unanswered questions remain about how the towers were brought down and whether a plane really struck the Pentagon” and that the “Bush Administration either knew about the plan” or “had a hand in it.” Heady, paranoiac stuff, to be sure, but there are even more forthright charges regarding the assassination of Malcolm X, the Jonestown massacre, and the “stolen” elections of 2000, 2004, 2008, and, for that matter, 1980. Believable? Some of it. An action-packed read? You bet. “–Mike Tribby

This whole “conspiracy” thing he’s talking about though, it has some merit but I feel some of it really goes too far. I can see some things happening the way he’s talking but there’s no way I believe the Bush Administration had any prior knowledge of the 911 attacks. Meanwhile though, I do believe some of the things he’s brought up “could” have happened though those are just my feelings and I have no basis for them. I do think there was more to JFK’s assassination that meets the eye. I have been reading a lot about the Kennedy’s in general lately but that’s because I’m interested in the era and I’ve read some pretty strange things about that family. I really wonder first of all why he was even a President in the first place. But…..that’s another post.

If you have no idea what he’s saying, here is an interview with Larry King.

17 Responses to Jesse Ventura. What do you think?