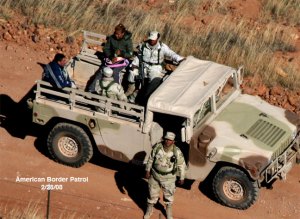 Okay, I’m gonna talk about it. I wasn’t going to but have since thought, why not. Let me begin by saying that most of us had ancestors in our family who came here from other places. That’s all very fine and good and it’s the “American Way.” My own dad came from Canada and for 35 years filed each and every year for his visa to stay here. He did everything the way he was supposed to. He became and American citizen in the early 90’s.

I’d like to know how you all feel about this law? Do you feel the authorities have the right to ask anyone for ID? Now, this is just my opinion but in times of trouble, I sure wouldn’t mind. Look what we have to go through in order to fly. It benefits us all though doesn’t it? I’m a Caucasian but I think I’d have to take my shoes off to fly and there are countless other things I need to do in order to get on an airplane. Is this not discrimination because they make everyone do it and not only certain people?

I’m not one to quote laws or quote the constitution but I just know common sense. If it benefits all of us, don’t you think it should be done? I can’t tell you who I’m quoting because they wouldn’t like it but I have talked to someone who lives in AZ and though right now it’s a pain in the ass, we have to start somewhere. This is a quote, “everyone is complaining that this isn’t the right thing to do. What is then? We’ve been talking about this for 25 years but nobody wants to do anything about it. Unconstitutional, to who? If you’re here illegally, you have no constitutional rights and if you’re here legally, then this shouldn’t bother you. Should it?”

This person shocked me. They and I are NOT anywhere in agreement with our political views and I really didn’t expect this outburst. I agree though. We have to do something. But what? Where does “racial profiling” end? Are we to “assume” that Mexican’s look like Caucasians? Or African-Americans? Or Asians? Of course not. Mexican’s have a certain look just like we all do depending on our heritage. I think Swedes or Germans or Italians tend to have similar looks. Blond hair or darker complexions and so what’s wrong with that?

So, I was going to leave all this alone because I didn’t want a fight but then I went on Facebook on Saturday and this is what one of my friends posted in his status:

“His name here” thinks that instead of protesting against the new law Arizona is trying to pass the people should embrace it and be proud to show their ID…After all they are proud to be here aren’t they?

I’ve also heard this being compared to Nazi Germany. Well, seriously, how’s that? There you had some mad man trying to rid the world of a People. In Arizona, we are just trying to take our county back. We aren’t trying to obliterate anyone. We don’t want to kill anyone. We just want everyone to be here legally. The right way. My “Arizona source” also said “people think they are doing jobs American’s won’t do and I’d like to know how they know that? Americans can’t find jobs now and the illegals have been here so long, we don’t know what Americans would do or wouldn’t do.”

One more thing and I’ll end this new tirade. I was watching the CBS Evening News tonight and the reporter was reporting that now all the illegals are leaving AZ and moving to other states. They are also reporting that more people are for this than are against it. One family on this program had two illegal parents and 10 children in a one bedroom apartment and all the kids are American citizens. So now how does that work? Is this now our responsibility? These people knew what they were doing. So now what’s to happen to all these children? I think that law also has to be redone. I feel for those children but I feel for all children and they didn’t ask for this.

We do have to start somewhere. I think we all agree on that. But what should we do other than talk about it?

Please be respectful of others opinions. This is a very touchy subject.

35 Responses to The Arizona law