All Because of a Piece of String 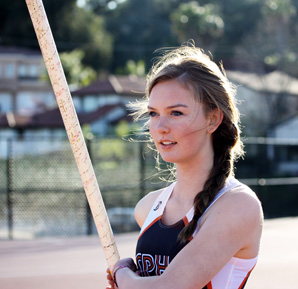 Recently, a track meet occurred to determine the winner of the Rio Hondo League Championship.  The teams in the meet were South Pasadena High School, coached by P.J. Hernandez, and Monrovia High School, coached by Mike Knowles.  The score was tight, and the championship came down to the very last event, the pole vault.  Monrovia’s girls had given their team the lead, and sat back to watch the final competitor of the day, Robin Laird of South Pasadena.

She lined up, began her run, but stopped.  Went back to the top of the channel, gathered herself, and began again.  The run was good, and she launched herself over the 7’6” bar.  A personal best that won the meet for her team.

Knowles, coach for Monrovia, was standing on the sidelines, pointing at his wrist and at Laird.  And that’s when it was discovered that Robin Laird had broken the rules.  She was wearing a friendship bracelet (a braided string bracelet tied around her wrist).  National Federation of State High School Association rules state, “Jewelry shall not be worn by participants.”

A disappointed Laird had to give up her jump, and her team had to give up their championship title.  They did so graciously.  Laird has stated that she took great pains to remove her jewelry before the meet, but forgot about the string bracelet on her wrist.  She was devastated when she found out that she lost the meet for her team.  Hernandez, South Pasadena’s coach, recalls asking Knowles, “Coach, you really want it to come down to this?”

A controversy of sorts has cropped up in the aftermath.  If you read the comments about this story – and there are hundreds and hundreds of them – there is a distinct distaste among some of the commenters.  Why didn’t the coach (Knowles) say something about the bracelet between Laird’s attempts? (remember, she aborted the first attempt, which was well within the rules).  One commenter claims to have been at the meet, and one of Knowles’ own competitors is said to have been wearing jewelry.  The general feeling amongst this group is one of “adhere to the spirit, not the letter, of the rule.”

On the other hand, a rule is a rule.  And the rule says, very clearly, “no jewelry”.  Whether it’s a braided string or a string of diamonds, a bracelet is jewelry.  And Laird was wearing it.

What do you think?  Do you think it was right to deny South Pasadena the win and the championship because one of their players was wearing a bracelet?  Or do you think that that Laird was judged too harshly?

15 Responses to All Because of a Piece of String