Are Boys Wired To Be Risk-Takers? 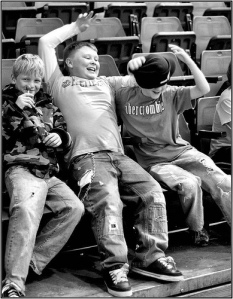 I’ve been in discussions about this topic before but I don’t think we’ve ever talked about it here…but we may have. I know on that “other” blog, there was much to say about it. What do you think? Are boys wired to be risk takers? This was the good question the other night and it’s a subject that always interests me.

I know that in my experience of working in the schools for as long as I did, I have to agree that the majority of boys are more daring and risk taking than girls. Not all mind you. I know there are always exceptions to the rule. I know many men who have the heart, feelings and emotions as a women does but the number of them are very limited in my life. I also know women who are daring and risk taking so I’m not talking about everyone here. I know there are many exceptions to the rules.

I now know some of the things my two boys did when they were young that I would have died had I known at the time. To hear them talk now, they’re lucky to be alive. I never knew when they were 4 and 7 they slid down the stairs in my laundry basket or they rode their bikes were they were prohibited from riding. I knew they lit a “few” fires in their fort but I suspect that they lit many more that I didn’t know about and YES, I did take them to the fire department and had them get a little talk from a fireman. It didn’t do any good though. I’d have had a heart attack had I known some of the things they were doing. I know Jason used to take my car out and drive it around WAY before he got his license and that’s something I never would even have entertained in my head. It would have terrified me if I did something to my dad’s car.

I’m not daring or risk taking in the least. I’m so afraid of the “what if” that I never really dared to do too much that might hurt me but man, my boys were NOT a chip off my block.

So here’s the question: do we encourage “rough play” from boys? Do we tell them “boys don’t cry” and do they pick to play with sticks as guns or somehow are we encouraging that? They can’t ask for cars and trucks when they’re infants but most boys do have those and most girls do have dolls. Is it us that does it or do the kids actually make those choices?

12 Responses to Are Boys Wired To Be Risk-Takers?