I love this stuff.

As you guys know, I do a lot of baking.  I love making and decorating cakes, especially, and making those cakes from scratch.  It’s a lot of work, but also a lot of fun and gives my creativity a short-term start-to-finish outlet.  I need that start-to-finish thing.  It must be my undiagnosed A.D.D. – I’ve never been able to finish long-term projects.  I can knit, crochet, sew, scrapbook, stamp… all that stuff, but it all requires a massive investiture of time, and I lose interest after a day or two.  So baking fills the bill.  And my tummy, for better or worse, because the result is almost always edible, yummy, and most important, chocolate.

So.  Here’s my Product Plug of the Day: 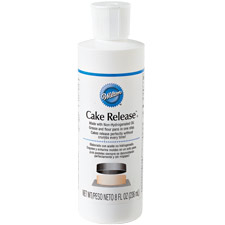 It’s called “Cake Release”, and it’s made by Wilton, the kings of cake decorating.

For those who bake cakes, you are familiar with the massive frustration that comes with turning your nicely baked cake onto the cooling rack, only to have half of it stick to the pan.  And then, if you’re like me, you utter words you never knew you knew, and set about peeling the stuck cake from the pan, and then mixing up a roux of frosting and milk to apply as glue and try to stick the whole mess together and pretend like nothing is wrong.  HAH!!  People always know.  And if they don’t, you do, and that’s worse.

So we use the old standby that our grandma’s taught us – grease the pan with butter or Crisco, flour the pan liberally by dumping 1/8 cup of flour in there, then rolling the pan around while tapping it to disperse the flour in a little cloud (dumping flour all over the countertops, stovetop, and floor in the process), and THEN, we cut out a piece of waxed paper or parchment to the exact size of the pan bottom, spray THAT, and stick it into the bottom of the pan, and then put the batter in and bake.  And PRAY LIKE CRAZY that it works, and that we didn’t miss a spot with the grease/flour bit… and that if we did, the nonstick pan we used will actually live up to its reputation and actually, you know, NOT STICK.

And then, a couple weeks ago, I was in Wal-mart, picking up some cake-boards and other paraphernalia that I needed for Josh’s birthday cakes (yes, cakes), and I saw this stuff on the shelf, called Cake Release.  Made by Wilton.

Can I just say this? I

Wilton.  Wilton is my friend.  I live for the massive Tent Sale that they have every summer.  I don’t get there often, but I live for it anyway.

So I bought the Cake Release, just to try it.

The stuff worked like a charm!!!  I liberally coated my nonstick pan (haven’t been brave enough to try without the nonstick) with the Release… a good dose and a paper towel worked well.  Dumped the batter in and baked it.  When it came out of the oven, I turned it onto the cooling rack, and the pan came off.  Immediately.  No sticking.  NO CRUMBS!!!!!  I didn’t have to put the ‘crumb layer’ on the cake underneath the layer of frosting!

I even used it on a pan of “Cheesies”, an egg-based, wicked-good appetizer that I make (look for the recipe in coming days/weeks), that bakes in mini-muffin pans, and they stick like crazy.  I used the Release, and no sticking.

I am completely sold on this stuff.  I’m so glad that I decided to try it.  It was worth every bit of the three or four bucks that I shelled out for it.  Go buy some.  You’ll be glad that you did.