Is it a Tip or Extortion? 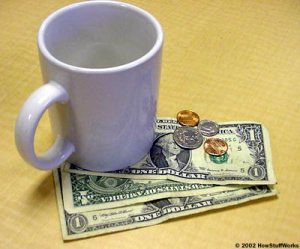 It’s expected.  So much so that restaurants pay between $2 and $4 an hour, and they get away with it, even though this country has a minimum wage set somewhere around $8 an hour.  Even if your server has treated you like crap and the food was cold, you are expected to leave something because that server only makes a paltry amount, and that tip is part of his or her wage.

It’s no longer 15%.  Nowadays, leaving anything under 20% earns you the moniker of “cheapskate”, and that’s the nice sentiment.  I’ve seen people go back and supplement the tip at a table where someone else was responsible for paying, but left a ‘less than acceptable’ tip – perhaps the old 15%.  I’ve heard of servers following “undertipping” patrons into the parking lot to shake them down for more money.

There’s a discussion over at The Stir (the site that I’ve switched to from “That Other Site”, since that other site’s comments have been opened up to evil), and the overwhelming response is, “I tip because I used to be a Server, and I know they make low wages, and that’s not fair.”

A further sampling of the responses:

(That which has been bolded is my emphasis, not the commenter’s)

I tip because I KNOW how much servers are paid by the hour.  I made about $2 an hour … and ALL of that was taken out in taxes.  At the end of every night, you must claim to have made at least 10% of your sales, regardless of how much people actually tipped you.  That means, if you’ve had a bunch of crappy tables that tip you $2 on a $50 check, you actually work for NOTHING.

I used to be a server. I still tip way above average. Not for bad service, of course. … There have been times where I have NOT tipped because I know what is an excuse, and what isn’t.  It’s not about not making ourselves look bad. It’s about  providing the server with compensation for the service they’re giving me. Anyone who doesn’t tip just because they are cheap should make their own dinner, and stay away from these poor, hard working people. The server doesn’t deserve to be stiffed because you’re cheap. 🙂

When I was … probably 18, fresh out on my own, I needed to take a taxi somewhere… I paid my fair (sic) and got out and didn’t look back. It was later that I learned that you’re supposed to tip cab drivers. I … felt absolutely horrible about it. What if that gentleman driving the cab was in real need of that tip to feed his children, or keep his electricity turned on…and maybe had to do without something because I had no idea I was supposed to tip him

I tip because I’m a waitress. If the service is exceptional  I always tip 20-30%. I know what it’s like having to bust your butt and only get paid an hourly wage of 2.13 an hour.

Is the government going to mandate that servers get the same minimum wage [as] everyone else? And if they do, and people don’t feel the need to tip anymore, what’s my motivation to give great service? If I get paid the same no matter how good or bad my service is, then why go out of my way to make you happy and comfortable? Is that really what people want? In the long run, I think that yes, tipping might be an outdated and even racist occurance (sic), but would YOU want to sacrifice good service so that you didn’t have to tip anymore?

So what I’m hearing here is that people are willing to work a job for an employer who pays well below minimum wage, but then they feel entitled to gripe about it when someone else doesn’t make up the difference?  That it is not the employer’s responsibility to pay a fair wage?  That it is the customer’s responsibility, not theirs, to see that their bills are paid and their children are fed?  Really?

These people are willing to accept an “outdated and racist” practice, because it’s the way it is?  And these same people see no reason, other than a good tip, to provide good service?  Why, then, are they in that job?  Why are they in any job?  Because isn’t the point, when you have a job, to do the best that you can, in order to achieve not only personal satisfaction, but promotions and raises?

Now, I can sit and argue all day with the merits and pitfalls of a national minimum wage.  Honestly, I’m on the fence about it, but it’s a separate issue, and I don’t wish to argue it right now.  The fact remains that the minimum wage exists, and I would like to know how restaurants get away with not meeting it?  And why do people simply accept it?  We’ve had riots in the streets (Haymarket), and formed unions (SEIU…) to see that people are paid a fair wage, and yet, this practice continues.

And the customer is made the villain when he sees it for what it is – extortion – and refuses to take part.

16 Responses to Is it a Tip or Extortion?