When Do You Turn Off The Tap?

Men, you are excused from this discussion if it’s gonna skeeze you out. That’s the last warning you get.

There’s a story being bandied about the Mommy Blogs about this woman, because she continues to breastfeed her six year old son.

Allow me to repeat that.  He’s Six. Years. Old.

Of course, this brings out the breastfeeding militants, who are quick to point out that “In Mongolia, the majority of children are breastfed into the childhood years,” and “It’s said that the best wrestlers were the children who were lucky enough to be breastfed the longest as well.”  Ok, maybe.  But most Mongolians don’t have refrigerators or multivitamins.  This woman is in England. Her kid takes time away from playing with his Nintendo DS to answer questions from the reporter.  They’re obviously able to afford food.

Those same breastfeeding advocates called me “ignorant and absurd” when I asked why this mother couldn’t pump the milk for her son? Why must this six year old suck the milk from her himself? (yes, I’m obsessing over the age.  Did you SEE The picture??? Here it is. Seared into your brain, isn’t it?) 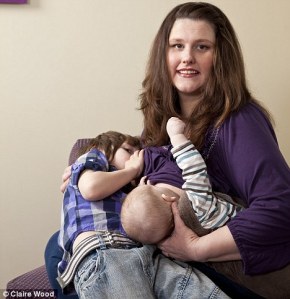 I’m willing to admit and accept that breast milk has benefits beyond infancy.  Current guidelines advocate a minimum of 6 months, and up to 2 years of breastfeeding. Some studies say that benefits could extend even longer.  And if science backs it up, I’m all for providing the nourishment for as long as it takes.  Age 6? Fine. 8, 10, 12? Maybe.

My problem exists with the actual distribution method.  This woman isn’t pumping the milk and storing it in a pitcher in the fridge.  The boy is crawling into her bed a couple times a week, suckling on one breast while his 5 month old brother is suckling off the other!

Some have proposed that the boy is looking for comfort, but the mother admits that he can find comfort in hugs.  What it comes down to, it appears, is that this mom simply can’t say “no” to him.  And that’s a prescription for a whole lotta trouble on down the line.

22 Responses to When Do You Turn Off The Tap?