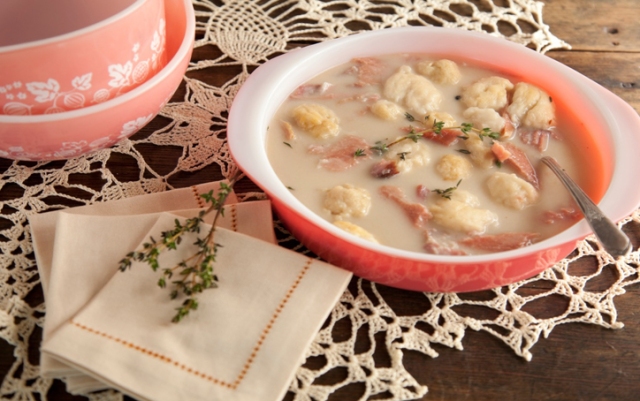 Every year until well after I’d finished college, my family marked the end of the Christmas holidays with my grandmother’s ham dumplings.

On Christmas Day, our feast often included both my grandfather’s baked fresh ham and a cured ham (and turkey, too—my mother was a glutton for punishment). There were lots of leftovers, and dumplings were MaMa’s way of using up the last of the cured ham. Still, I think we looked forward to having them more than we did the ham.

Flat, noodle-like dumplings of this sort have a long tradition in the North Georgia of my grandmother’s childhood and weren’t limited to the holidays or to the stewed chicken they’re most often associated with today. MaMa made them year round, with everything from squirrel to chicken to leftover turkey, but only at the waning of the Christmas season did she make ham dumplings. They were as much a part of our New Year as black-eyed peas and collard greens.

When I make them now, I usually add herbs—a bouquet garni of bay, parsley, sage, and thyme in the broth, and a finishing handful of chopped parsley at the end. MaMa didn’t, but it doesn’t follow that she wouldn’t have approved of this meddling.

She spent her life looking forward, and never stopped experimenting or embracing change. The last few years of her life, in fact, she started making the dumplings from canned biscuits. That’s a change we could have done without, but then, we weren’t the ones mixing and rolling the dough.

The best hambone for this dish is that from a dry-cured “old” or country ham, but it is even respectable made with a brine-cured hambone.

1. Put the bones into a large stock pot and pour the cold water over them. Turn on the heat as low as you can get it and bring the water slowly to the boiling point, carefully skimming off the scum as it pops to the surface. It will take about 45 minutes.
2. Add the onion, carrot, and peppercorns. Simmer slowly for at least 1 hour, 2 is better. Strain, discarding the solids, return the broth to the pot, bring it back to a boil, and reduce it to 1½ quarts (about half).
3. Make the dumplings according to the recipe. Drop them a few at a time into the simmering broth and let them simmer for 5 minutes. Add a dusting of freshly milled pepper, stir in the ham and parsley (if using—my grandmother didn’t), and simmer for 2 to 3 minutes more. Ladle onto a serving platter or individual soup plates, sprinkle with more parsley, and serve at once.

1 cup whole milk buttermilk or plain, all-natural whole milk yogurt thinned to buttermilk consistency with water or milk
1. Sift or whisk together the flour, soda, baking powder, and salt into a mixing bowl. Cut in the lard with a pastry blender until it resembles coarse corn meal.
2. Make a well in the center and pour in the buttermilk or yogurt. Using a wooden spoon and as few strokes as possible, quickly stir the ingredients together.
3. To shape flat dumplings (sometimes called “slipperies”) like my grandmother’s, turn the dough onto lightly flour a smooth work surface. Flour you hands and gently push it away from you to flatten. Fold it in half, gently press flat with the heel of your hand, and give it a quarter turn. Repeat this until just smooth, about 12 to 15 folds. Dust the work surface and the dough with more flour and roll it out to a thickness of 1/8-inch. Quickly cut into 1-inch strips, and then cut them into 2-inch lengths. Cook immediately.