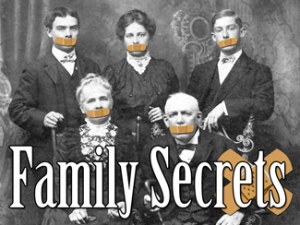 I can remember when I was a little girl and my parents would be talking about something in hushed tones and they’d tell us that “this stays in the family.” We knew that this was something we weren’t supposed to talk about outside our house. It wasn’t really a big deal but back then, we listened. I’m not sure with the way things are today that would work. Now if you tell a kid not to say anything they go to a teacher or someone and the next thing you know you have CPS at your door. Of course these things weren’t abuse or anything they were just “family secrets” usually.

Who is having money problems or who’s having an affair or who’s gay or who got locked away for alcoholism were all things back then that people just didn’t talk about. I think a lot of that stuff has changed over time and now we talk more about things but really, sometimes I still think some of this stuff is better left to the family.

I was watching The Talk one day and they were talking about aunt’s not being an aunt but was really the mom or grandpa is really your uncle and stuff like that. I don’t have anything that juicy in my family. But the fact is there have always been family secrets.

Here you have Ronald Reagan Jr writing a “tell all” about his dad’s Alzheimer’s and apparently spilling family secrets and older brother Michael is telling him to keep his mouth shut. He wants his dad to have dignity even in death.

I think I agree with him. I’m not sure what good it does for him to tell all this stuff now. If he did have the beginning stages of it while in office, what good does it do to tell this now? It can’t change anything so I have to agree with Michael and wish our former President didn’t have to have this dirty laundry aired.

What do you think? Do you think once a person dies, they aren’t owed the privacy anymore?