Trouble in Wisconsin…how do you weigh in? 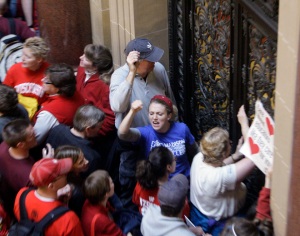 I don’t want to get all “political” on anyone or start a big war. Let’s even leave politics out of it. How do you feel about what’s going on in Wisconsin with the rioting and the senators all leaving the state to avoid voting on something they didn’t want to vote on?

I’ll be honest and tell you I have a huge problem with teachers calling in sick so there wasn’t any school and the senators running away to avoid a vote. I don’t feel personally that anyone that we vote in like this should be able to high tail it out of town if they don’t like the way things are going. I don’t really care what it’s about.

In my opinion, we’ve all been hit hard by the economy. What gives anyone the right to demand such things and then run away if people don’t agree? We’ve all taken pay cuts and many of us have lost jobs. What makes all these people think they have the right to do this? If you want my opinion, I think they should all be fired.

I felt 50-50 in the beginning. I felt bad for the teachers. They have our kids more during the day than we do. They have a lot of responsibility and really, I don’t think they make enough money anyway but I think the message all the kids of the teachers who decided to call in sick to “prove a point,” are learning the wrong thing. If you don’t like something, you run from it. I believe you should stay and fight.

I’ve also known many people who’ve needed a union and back in the day when gangsters were running amok, they were needed but for the most part, and the better, times have changed and laws have changes. I don’t feel we need unions like we used to. There is job security to a really certain degree.

I also know there’s a lot of waste going on. Just for example, when I left my job from the Minnetonka Schools, I had 6 years of sick time coming to me that I lost because really, who needs 2 sick days month? That’s how it added up. It added up like a bank account but who’d call in sick for 6 years in order to get that money?

I know there’s waste. I also know that there are MANY of us who can’t live on social security alone. Most of us need something more to live on than just that so why should these people be any different than the rest of us? We all have to save and invest and have some kind of “back up” retirement. I would really think right now, in these times, when fat needs to be cut, why would anyone be so unreasonable?

I think the bottom line for me is the way all these people act so shocked with the fact that somehow they got the vote to pass. NOW they want to sit and negotiate. Where were they a week ago? Or two weeks ago? Hiding out in Illinois? Isn’t it a little late for that now?

How many of “us” could run off, mad at our boss, refuse to do our jobs and then still have a job?

How do you weigh in on this?

9 Responses to Trouble in Wisconsin…how do you weigh in?