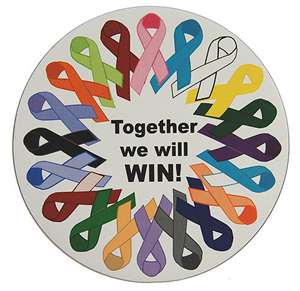 Apparently, “World Autism Day” happened this year on Saturday, April 2. People were asked to light their houses blue (not sure how… go buy special outdoor lights and point them at the house, maybe? Change all of the bulbs in your house to blue that day?)  I thought that was a bit farfetched, so I went and visited the site.  They suggest things like, purchasing a t-shirt, becoming a fan on their Facebook page, and hosting or attending an event in your area. I’m not sure where the “light your house blue” thing came in, unless it’s from a letter that a 13-year old autistic boy wrote to President Obama, asking HIM to light the White House blue for the day.

Anyway, this got me thinking… a couple months ago, there was a fuss over everybody putting their favorite cartoon character’s image as their “Profile Picture” on Facebook, in support of Child Abuse Awareness. How it got started, I don’t know, but for a weekend or more, not only did everybody change their picture to Bugs Bunny, Rainbow Brite and He-Man, but the battle raged over the effectiveness or futility of the actions. “What good is changing your FB Profile Picture going to do? It’s not going to get a child out of the hands of an abusive parent!” the critics cried.  The participants replied with, “But it makes people more aware of the problem, and maybe something good will come of it!”  “Baaaah, you suck!!” screamed Team Against.  “You suck back!!” screamed Team For. And it degenerated from there. It would have been hilarious, if it wasn’t so incredibly sad.

But it turns out, that little FB stunt was effective. Child Abuse Relief Charities around the United States and England experienced a bump in donations because of it.

Despite the good it does, and despite the fact that I, too, participated in the “change your Profile Picture” stunt, I have to admit, I am really “caused-out”. Every time I turn around, I find myself having a ribbon shoved in my face. Red for Aids… or maybe it’s Red for Women’s Heart Health. When I was in high school, it was actually Red for MADD… they started the whole “ribbon craze” back in the ’80’s with a campaign against drunk driving.

So it brings me to my point… how effective, really, is the whole “awareness campaign” thing?  Are others, like me, becoming so exhausted by the rainbow of ribbons being thrust at them on a daily basis? Or do the Days and Ribbons and FB Crusades really work? It seems, in the short-run, anyway, that the Awareness Days and FB Campaigns have some small influence on fund raising. But  I wonder, do those that participate do it because it’s ‘the thing’ or because they believe in the cause? And do they stick with it, once The Day is over?  What about you? Have one of those days or crusades caused you to become involved in a charity that you otherwise would not have?