Is It Finally Spring?!

Spring has sprung for most of you, but for those of us in the Upper Midwest, we are still waiting for the snow to melt!  Neighbor Jenny did say she had Tulips coming up so that can only mean that spring will at some point show up here! 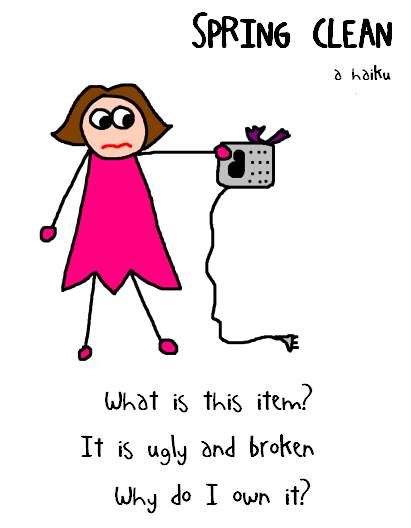 With the arrival of spring, there comes many great things.  The grass turning green, warmer temperatures, having the windows open and my all time favorite…spring cleaning!!!!! NOT! Who in their right mind looks forward to spring cleaning?  Or cleaning of any kind for that matter!  Not I said the little chic.  I was talking to a girlfriend the other day, and she was saying how she has a list on the side of the refrigerator that lists all the rooms of her house and what needs to be done in each room.  As she accomplishes one thing, she marks it off the list so she can see her progress and how far she has left to go.  (I suppose it helps her feel like it’s all worth it.)  She was about half done during that conversation we had and was spending this week finishing it.  The WEEK!  Cleaning!  I told her she was a rock star and could come do my house next 🙂

Well, that got me thinking about my own routine and what everyone else does.  Do you spring clean?  Do you dedicate a whole week (or a certain # of days) to it and go balls to the walls or do you just do a little here and there and get done about July?  I don’t dedicate a whole week to cleaning.  I don’t have a list that I mark off.  I just clean as the year goes. If one day my closet has finally gotten the best of me, I’ll take the time and clean it out.  If I finally notice all that dust on the ceiling fan, I will give it the old elbow grease.

And actually, the ceiling fan in my bedroom is what made me think it was maybe time to set up a spring cleaning routine!  While I was off of work a couple weeks ago, I was bored so I cleaned our bedroom top to bottom and let me tell you, for a fan that is NEVER turned off it sure did have a lot of dust on it!  Today when I was cleaning up the kitchen after breakfast, I decided I would clean the whole kitchen.  Have you ever looked in your toaster?!  I mean really looked at it?!  WHOA!  It’s amazing there aren’t more house fires every year!  So, I cleaned out the toaster and started on the refrigerator which I know has needed to be cleaned for awhile.  I took out every shelf and drawer, washed them up, washed the inside of the fridge, threw out a bunch of stuff, and now it looks like we have a brand new refrigerator! I did all around the outside and even moved it to sweep and mop behind it.  (It wasn’t as bad as I thought it would be.) It took me a couple of hours to accomplish all that so I decided to brake for lunch and write about it!

What’s your routine if you have one?  I decided I’m going to get as much done as possible as quickly as possible!  It might not last for next year, but at least I’ll have a clean house going into summer!  Now, back to the grind because my cupboards are calling 😦

9 Responses to Is It Finally Spring?!