Pull Up an Egg! 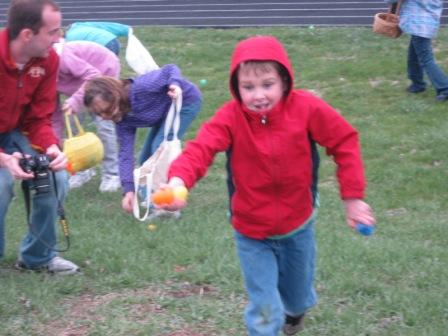 I figured, since we may or may not be busy with family next week, Easter Sunday, I figured I’d get our Easter Egg Hunt out of the way today!

We attended our towns Egg Hunt today. It hailed on us, but the kids had an absolute blast, as you can see. It isn’t really a “hunt”, since the eggs are just scattered across the football field, and divided into age categories, but The Bunny shows up, and the eggs are full of candy and prizes, and its a good 20 minutes of absolute mayhem. The kids are a riot. I love small towns.

So, in addition to our usual “check in and tell us what you’re up to” bit, tell us… what is your family’s Easter Tradition? Do you still hunt for Easter Eggs with the little-bittys? Do you go to Church? Do you have a big ham dinner with family? Or do you do something completely different, or don’t celebrate Easter at all?

And remember, be nice. If you’re not, we reserve the right to mix a few RAW eggs in with your Easter Eggs…. good luck figuring out which is which!

16 Responses to Pull Up an Egg!