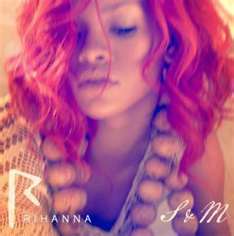 So here I am, a mom and a musician. And my quandary-of-the-week is… how do I deal with music and my son?  He is showing the same kind of love of music that his dad and I both have, that is, we listen to pert-near everything. I have particular passions for marches, Josh loves them too. I have a Celtic beat drumming with my heart; Josh knows all the words to “Wild Rover” and “Marie’s Wedding“. Steve has introduced him to The Outfield and Nirvana. We all listen to Country Music, and sing “Catch all the Fish” together. We love music around here.

So often, in the car going places, Steve will be scanning the band. He often ends up on the “top 40” station. Only they don’t call it that, anymore, I call it that, because that’s what it was back ‘in my day’. But you know the kind of music I’m talking about – all the popular pop stuff.

And one day, “S&M” by Rhianna comes on.  I nearly wrecked the truck. Because my son, my innocent, blond-haired, blue-eyed, obsessed with Star Wars and Legos baby of mine… sang. along.  To “S&M”.

For those unfamiliar, here is a portion of the lyrics….

Love is great, love is fine
Out the box, out of line
The affliction of the feeling
Leaves me wanting more

(skip to rest of song)

Oh
I love the feeling
You bring to me
Oh, you turn me on
It’s exactly what
I’ve been yearning for
Give it to me strong

And meet me in my boudoir
With my body suit on, on, on

I’ll give you a moment to clean the coffee off your computer screen….

Yeah, so there’s the lyrics. Every time I hear those “nanana’s” starting, I turn off the song. I don’t think it’s at all appropriate for a 7 year old to be singing. Frankly, I don’t think it’s appropriate to be playing on the radio. And I’m not one to be easily offended by music. I get music. I get that it’s an expression when sometimes you can’t find any other way to say stuff.

But whips and chains???

On the other hand, Steve thinks I’m being a prude. (my word, not his) He is of the mind that we should know the music that Josh listens to, that we shouldn’t ‘forbid’ anything, because suddenly it becomes something that he wants more than anything else. I get that. But I also get that I have to teach him that there is good music, there is bad music, and there is mediocre music – and why I think those things. This particular song falls into the “bad” category for more than just the lyrics. Personally, I don’t like very many songs that are ridiculously repetitive like this one. I have other reasons, too.

But I’m stuck. I don’t want him listening to this particular one – it’s off limits when I’m around, period. BUT… I also know he’s going to hear it in other places. The school bus. The pool. Friends houses. I’m not going to tell him he can’t. But by the same token, I don’t want him to think I condone the song.

What would you do?

18 Responses to A Musical Quandary