Once upon a time, a photo was incontrovertible evidence that something happened. Now, through the magic of Photoshop, anyone can create a picture out of thin air to support whatever story they happen to have running at the moment. So, with all of this manipulation going on, just exactly what are we supposed to believe? It used to be that if you had a photo, it was hard proof. Now, it isn’t. You can manipulate any photo to make it show anything you want. Frightening.

Some photoshopped photos are obvious, even artsy:

Some are pretty cool:

Some are just plain funny:

The first three categories are fun, compelling, even disgusting in some cases, but this last category is messing with history.

Think about it… when we were young and learning how to research things, it was always advisable to have a picture accompany your research. Photos convey a sense of reality, they ground the story – as fantastic as it might seem – with hard evidence that yes, not only did this event take place, someone was there to witness and photograph it.

There has been an outcry, but not a big one. Or it’s big, and it’s just not reported because some of those guilty of the photoshopping are the same ones who are in charge of the reporting. There’s a conspiracy for you, that I’m not going to get into right now.

We’ll keep the discussion here: how are we, as regular people who have a bazillion things to do each day, supposed to look at the cover of a newspaper or a magazine, and trust that what we see is real? When is it ok to “airbrush” and when is it not ok? Currently, there is a controversy in the fashion/glamour magazine world, because companies like Ralph Lauren are photoshopping their models to inhumanely thin proportions (yes, these two ladies are the same person!):

This happened to Faith Hill, too. I think she even grew an arm…

It used to be that if you had it in a photo, it was undeniable proof – either of guilt or innocence. Now? Anything is possible. And that’s a frightening concept. 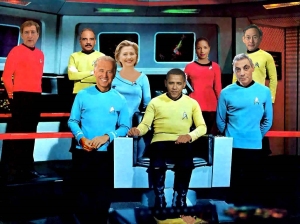