DOWN WITH EVIL CORPORATIONS!

You know, I’m not even sure I understand what all these people are protesting. In general, I don’t go for protesting. I think there are better ways to get your point across and tend to think peoples feeling get the better of them and fighting is about all that takes place. So when I saw this, it made it easy for me to understand part of it.

What do you think of this? I heard it on The View this morning and went looking and found it here. I copied and pasted it below.

“This graphic is making the rounds on Facebook. It ties in with something I’ve always wondered: where do people who don’t like corporations work? Do they seriously want to turn the clock back by centuries–it would take some research to figure to how many–to a world in which the only forms of business organization are sole proprietorships and partnerships? And who do they think designs, manufactures and distributes the products they use? Elves? Liberals denounced Mitt Romney for saying “corporations are people,” and I think they even made a video about it. But of course Romney was right. A corporation consists of its owners (people who are shareholders) and its employees (people who work for the company). It is an elementary rule of law that a corporation can act only through people–its employees and agents. So how do liberals think they can hurt corporations without hurting people? The sheer stupidity of such thinking is enough to give you a headache.

Anyway, here is the graphic:” 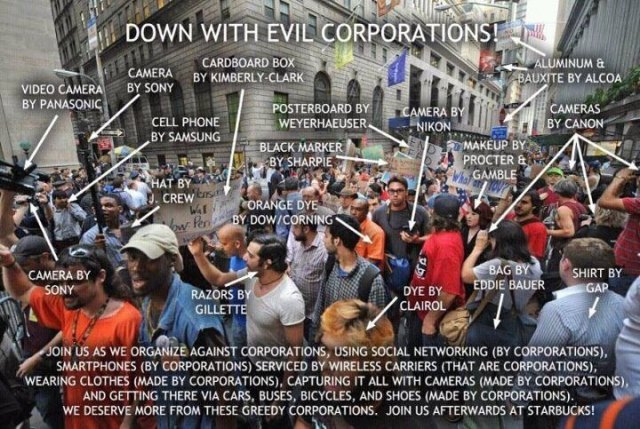 11 Responses to DOWN WITH EVIL CORPORATIONS!