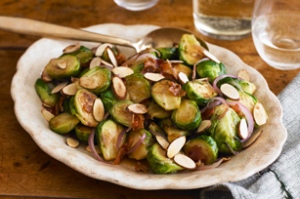 COOK bacon in large skillet until crisp. Remove bacon from skillet with slotted spoon; drain on paper towels. Discard all but 1 Tbsp. drippings from skillet.

HOW TO TOAST NUTS
Toasting nuts adds crunch and intensifies their flavor. To toast nuts in the microwave, place up to 1 cup nuts in microwaveable shallow dish. Microwave on HIGH until fragrant and crisp, stirring every 30 sec.
SUBSTITUTE
Use apple juice instead of apple cider
From Kraft Foods