Should Public Breastfeeding Be Allowed? 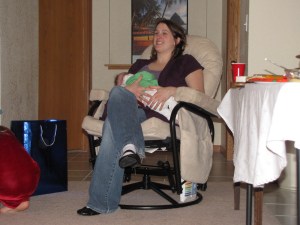 Have we discussed this here yet? Boy, I’m almost afraid. I’ve gotten into some nasty stuff with this subject but seeing Paul’s reaction to this made me want to ask because he’s of the age that this really bothers him but it’s nothing personal. We just grew up differently.

Do you think breastfeeding should be allowed in public? This is my opinion. Obviously I think it should be allowed. Stuff happens. But I do have several “problems” with some of these woman and this new story.

This WCCO-TV reporter Lindsey Seavert said “When you’re in public, it’s really tough to find that best situation. When your baby cries and screams and needs to eat, you panic, you freeze, and you just want to run to the nearest, safe spot to breastfeed your baby.”

Has she not thought of packing a diaper bag and pumping and having a bottle or two on hand? Like moms like me who weren’t able to breastfeed? I’m sure there are many more parents like me that had to do that too. Carry a diaper bag so you’re prepared for the emergencies having a baby create. You do know your baby is going to have to eat in so many hours. Why wouldn’t you be ready for that? Prepare for that?

The other problem I have with this story is that sex was brought into it. What in the world does sex have to do with it? What does showing a Playboy magazine and breastfeeding have in common?

This might just be me but here’s how I fed my boys. When they were brand new and even for probably 3 or 4 months, I’d find a nice quiet spot (rocking chair in their bedroom usually) and just feed them and talk or read a story. Sometimes I just read the book I was reading at the time to them out loud. Or I’d sing softly. I didn’t go into the middle of a mall where there were people being loud and coughing and sneezing and the lights are harsher than harsh when my baby needed to eat. I didn’t go to a restaurant during happy hour and think OOPS, time for the baby to eat.

Didn’t most of you think ahead when you were going out or am I in the minority? Keep in mind, I didn’t bottle feed in this manner either.

I can’t stand these “nurse ins” or riot like things these zealots are doing now. Women are now doing them in stores and restaurants. I think not long ago they did one in The American Girl Doll stores. An Applebee’s not long ago and now Target.

People who do this don’t realize it’s making things worse. They think that drawing attention to it in a mob like setting is helping bring awareness. Bring awareness? Seriously? Like we don’t know you have to feed your children? Bring awareness to who and to what exactly?

There is a certain age when people get older and I think it’s most likely men who feel uncomfortable around this. It’s got nothing to do with sex. It’s also people with much younger children who may not know what’s going on and then you have to explain things (when your eating a meal or out grocery shopping) you’d rather wait to explain. It’s not that you want to hide it but it’s too busy right then. Then zealots say you should tell your children but who are they to tell you that? Then aren’t they forcing their beliefs on you? It’s like anything else you wait to explain until kids are old enough to get it or the explanation doesn’t mean anything.

Isn’t this using your baby to prove a point? What is the point? So if you “stage” a nurse in, is your baby “really” hungry or are you just forcing your breast in their face? How can hundreds of babies need to eat at the same time and if that’s the case, why wouldn’t you feed your baby in the privacy of your home?

I just don’t get it. I know so many woman who’ve breastfed and you’d have never known. They go into a nice quiet spot to feed their baby. Nobody I’ve ever known has just whipped it out in front of anyone let alone strangers. Why wouldn’t YOU want that privacy for you and your baby? I think these woman (or most of them) just want to cause a stir or problem because you can feed your baby anywhere you want. Even at a table at a restaurant if you choose. We’ve been doing it for years. Just feed your baby. Why make the fuss? In my opinion, if you feed your baby is a crowded restaurant screaming *look at me, look what I can do*, you’re just itching for someone to take offense. It just makes sense that someone would in that kind of crowd.

I’m not against breastfeeding for crying out loud. I’m totally for it and wished I could have done it. I’m just for not having to get on a stage to do it. It’s not about being uptight or it being sexual. It’s about feeding your baby in the best place for the baby. If you KNOW your baby will need to eat in half an hour, why wouldn’t you just wait to go out? I had no choice and had to bottle feed and I waited. It was best and private for my baby and that’s what came first. Not what I could prove.

We can’t all breastfeed and I take offense at the way they make “formula” feeders feel. I think in general a lot of these women just want to cause problems. I say just feed your baby and leave all the publicity out of it.

What did you do? How do you feel?

15 Responses to Should Public Breastfeeding Be Allowed?