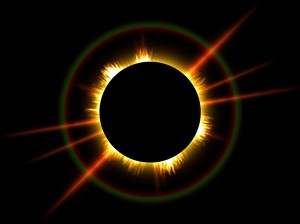 This Sunday, May 20, at around 7:30 PM CST, there will be an Annular Solar Eclipse. This means that, in some parts of the world, if you happened to be looking directly at the sun, you’d see a “Ring of Fire” – the edges of the sun, framing the moon as the moon passes between the Earth and the sun.

I do not recommend looking directly at the sun. At minimal, it will cause you to go into a sneezing fit (seriously, it will. It’s a genetic thing that affects about a third of the population). But it is likely to do some sort of damage to your eyes, the worst of it being blindness. And trust me when I say this – you do not want to go blind.

You make an Eclipse-Viewing Camera. Basically (and those instructions are much more concise, with pictures), in the “complicated” method, you take a large cardboard box, cut a hole for your head, and a smaller hole for a tube. Stick the tube in, so it’s slanted over the back of your head, and the sun can shine through it. Cover the sun-end of the tube with aluminum foil, and poke a round hole in the foil. Put a white piece of paper on the wall of the box in front of where your head will be. This will be the “screen” where the tube will project the image of the sun. Then, at the appointed time, put the box on your head with the tube facing the sun, and watch the eclipse on the screen in front of you. Be sure that there is someone with you who will take pictures of you with this box on your head and post them on Facebook for the entire world to see, because BOY are you going to look like a dork!!! (ok, that link doesn’t give you the head-in-the-box instructions. That was from another site. This link gives you a look-thru-the-side-of-the-box instructions)

But you’ll get to see the eclipse, which will be cool.

OR, you can do it the simple way (second method on the previous page I linked you to), and find a flat piece of cardboard. Cut a square in it. Take a piece of foil, a little larger than your square. Punch a round hole in the center of the foil, then affix the foil over the square in the cardboard. Use the cardboard to project an image on the ground in front of you. The farther you hold the cardboard from the ground, the bigger the image of the sun. Again, you’ll be able to view the eclipse this way, through shadows, without looking directly at the sun.

If you look at the original link up there, it takes you to a NASA page, which gives the times of the Eclipse in Universal Time (UT). You can Google UT, or you can go by the fact that Eastern Iowa is UT-6 hours. So Midnight in UT is 6 PM in CST. Go from there.

Depending upon where you are in the States, you’ll see a different eclipse. Here in the Midwest, we’ll only see a partial eclipse, around 7:30 in the evening. On the East Coast, it’ll probably be less of an event (Sorry, Michael), and probably closer to dinner time. But those of you in the Western States? Particularly if you’re in AZ? Wham!! You get the full show, baby!! And I’ll be here, stewing over the coolness that you get to witness that I don’t.

I think I’ll have my Cub Scouts make the head-in-the-box box. That’ll make for some excellent pictures. 🙂

4 Responses to View the Solar Eclipse