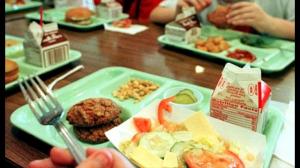 How do you feel about this? Are you happy to see school lunches at least trying to be more nutritional?

I know from working in a school that those cooks have a nasty job. They have to cook what the district tells them to and then everyone comes down on them personally if something doesn’t taste good. It really is a thankless job.

It’s also very tricky when you’re trying to cook for thousands of kids in 6 different lunch periods. Whether you realize it or not, it’s hard timing all the food for so many shifts and serve and clean it all up at the same time. I used to watch those women do that and it was like a dance. Everyone had their own job to do and off they went.

So I think now, with these changes, it’s going to be a little harder for the cooks at these huge schools just because without preservatives, things need to come more in their “natural habitat.” That means no more “mini carrots” so they will have to be washed and peeled. It’s going to take the cooks a lot longer to make lunch.

Do your kids eat a school lunch or do you pack a lunch? Do you worry about what your kids eat or don’t eat at lunch? I can also assure you, just because you pack your child a really healthy lunch, doesn’t mean they’re eating it. It used to make me ill the amount of food kids throw. If you saw what your kids put in the garbage, you’d pack them half of what you do. Especially if going outside is an option. MOST kids want to eat really fast and go out and play.

What do you think of this change? Will it affect if you pack or buy now?