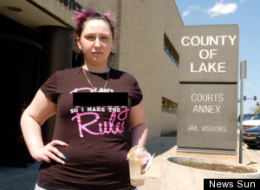 I’m not even sure where to go with this so I’m just pasting the story here and we’ll see what everyone thinks.

“A civil suit will be filed next week by a Round Lake Park woman jailed for wearing a T-shirt with words a judge found objectionable.

“We intend to file a lawsuit next week,” said Peter Kalagis, attorney for Jennifer LaPenta.

He said the civil suit will be filed by next Wednesday in Lake County Ciruit Court.

LaPenta, 20, accompanied a friend to appear before Judge Helen Rozenberg Monday wearing a T-shirt that read: “I own the (female body part), so I make the rules.”

The judge singled her out from the gallery and charged her with contempt of court. Rozenberg sentenced her to 48 hours in jail, but LaPenta was released Tuesday.

After LaPenta’s release from custody, Kalagis stated that he and his client wanted to sit down and discuss the matter with the judge. Both he and LaPenta contend that LaPenta’s rights were violated.

“We were going to reach out to the court, but they have refused to speak to us. It might require legal action,” Kalagis said.

Chief Judge Victoria Rossetti stated that it was inappropriate to comment on an ongoing matter, he said. She and Rozenberg said as much to the News-Sun as well.

LaPenta wore the T-shirt and sweat pants when she was released from jail. She said that she was at the gym when her friend asked her for a ride to the courthouse and did not have time to change.

Rozenberg ordered LaPenta handcuffed without giving her the opportunity to reverse her shirt or exit the courtroom, LaPenta reported.

She also contended that she never went to bond court or had the opportunity to call her mother after her arrest.

“This was wrong. This is going on her record and there was not one swear word on that shirt,” said Rachel LaPenta, Jennifer’s mother.

“The judge was on a power trip. Her rights were violated,” said Jennifer’s aunt, Rose Cirelli of Round Lake Park.

Kalagis said that legal action will “probably be brought forth.”

What does everyone make of this story?