What a day, what a day!  I sure hope Toby had a great birthday.  He should have!  We swam with the sea turtles and spotted whales and dolphins!  Today was our snorkeling excursion.We were up bright and early at 5 am to make it to the 6:15 check in time at Maalea Harbor about 30 min south of us.  After having to run to the front desk for TP, we were on our way.

Did I tell you all yet that it has been windier than all get out here??  Apparently, this high wind is very unusual for this side of the island, but it’s hung with us all week and doesn’t sound like it’s going away anytime soon.  So, we hoped for the best since some of the boats haven’t been going out.   We got lucky!  The captain said we were heading out and we’d see what it was like once we got out of the harbor.

Thank God we got out of the harbor!!!  The boat (which was a big catamaran) was doing nothing but rocking from side to side as we waited to push off.  Once we got going, I hunkered down the best I could so a) I didn’t blow overboard and b) because it was freezing in that wind!  Toby, of course, thought the weather was just perfect.  Surprise, surprise. 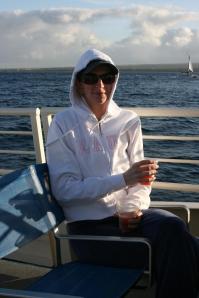 Once out on the ocean, the captain informed us that we would not be able to do the first snorkel site because the wind was too high and it was too choppy at the Molokini crater to see anything.  That did bum me out a little because it is suppose to be awesome snorkeling and when will I ever be able to say I swam in the crater of a volcano?  Next time I guess.  Instead, we headed to turtle town to swim with the sea turtles and check out the reef there.  They served us fresh fruit, fresh fruit juice, muffins and bagels along the way to help take our minds off the swaying boat.  It was good:)

Finally, we arrived at our destination.  According to our captain, Ted, the water was as calm as he’s seen it in a week and a half so we would have great snorkeling conditions.  Ah, excuse me?  Once they anchored the boat, the boat was rocking so much from side to side I thought I was going to loose my breakfast!  I am not kidding.  When they say bring your sea legs, they mean it!  After he went over the safety info, one of our marine naturalists gave a snorkeling 101 to anyone who wanted to listen.  I haven’t snorkeled since 2004 so I was listening.  Didn’t learn much new, but it was a good refresher none the less.  Toby was in a hurry so I tried to gather myself as best I could and off we went.  I rented a wetsuit top since it was so cold and I am so glad I did!!!!!  We stepped off the end of the deck, into the water, and I thought I was going to loose my breath.  FREEZING!!!!!!!!  There’s no way I would have swam in the ocean had I not paid to do it!  Toby kept saying, you’ll warm up, give it time, blah blah blah.  I couldn’t breath right so I couldn’t relax so I was thinking about how cold I was and on and on.  The waves were big too and they would just push you in one direction whether you wanted to go that way or not.  Calm conditions, remember?!

After a few minutes I adjusted and found myself having fun.  The fish are so beautiful and the reef is amazing.  We saw the green sea turtles and one swam so close to us I felt the need to try and get away even though he was just curious and had no interest in hurting us.  All of the underwater pictures are still on the film camera so I don’t have those to share with you, but I do have ones we took from on board the boat.

After snorkeling, we settled in for lunch and whale watching since we had time to spare.  How lucky we were!  We managed to see a female humpback whale and her yearling whale playing with 2 bottle nosed dolphins!  Both the whales and dolphins are very curious animals so they like to look at you as much as we do them.  Since the whales are endangered species, we couldn’t get closer than 100 feet, but there was one point that they were much closer than that.  They are huge creatures!  It was the highlight of the day for me.  Swimming with the turtles was neat, but to see such large mammals in their natural habitat that close was unreal. 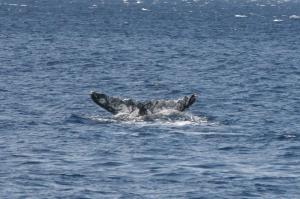 Being in a place this wonderful and magical makes you understand how fragile our world is yet how resilient it can be.  Truly amazing.  There is no other way to describe it.